Welcome to this blog! I am an amalgamation of personalities, dare I say - fairly interesting ones ;). And these personalities - most of them - quite enjoy expressing themselves and getting to know others as well.
Whether it's health at every size or size acceptance; whether it's the counselling sessions I do or the breakthroughs I have in getting to know myself; my experiences on the Walk of Hope or my corporate avatar; I learn every day and intend to put my insights out here.
Hope you enjoy reading and happy to hear from you! 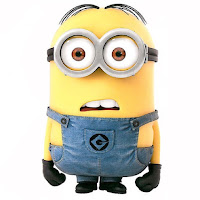 Fear is such an interesting emotion. Not that another emotion is any less interesting but for purposes of this writing -  fear is my muse. Fear is a basic requirement for survival - if our brains were not wired for fear we would never have survived the wild old days when this emotion got adrenaline coursing through our bodies and helped us run from predators, enemies and other such perilous happenings. That physical function of fear continues to help us in that last minute swerve in the crazy traffic or jumping out of the way for a bike that came out of nowhere on the wrong side of the road and other modern day city girl perils. Quite a life saver this fearfully fear-some fear. 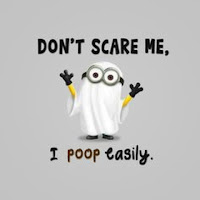 It is quite evident that fear is a powerful emotion given how it is milked by the advertising world. Get insurance or else, get a house of your own or else, follow that diet plan and cook with only that oil or else and my favorite but somehow ineffective on my husband - buy your wife that diamond ring or else. Fear does get us doing things - off course different strokes for different folks and I like to call it motivation but the truth is when I am not in the "mood" for it, it's the fear of not meeting that deadline which makes me finish the work I've been procrastinating all day ;). So yep quite a useful little thing to have around sometimes this frightfully frightening fear. 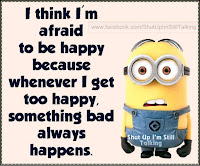 Despite its usefulness however, fear has this sneaky way of causing paralysis without the afflicted even knowing they are paralysed... A hypnotic sort of effect. It makes one decide to stay in one's mold - the mouldy molds of old - refusing to choose anything different and convincing oneself  that's the way to be. I have started these days to use the term insecurity synonymous with fear because I often find that it's two sides of the same coin. Not always but often in my observation it is the insecurity of being rejected that manifests as the fear of speaking out or being oneself, which we then label as being diplomatic or introverted or some other socially acceptable phenomenon. It's incredible how much we have rejected, judged and criticised our own selves that we are afraid of being seen for who we truly are or choosing what we truly want.

I remember the time when for some reason or the other I was late for everything - and not just by 15 mins but sometimes by a whole hour. It was driving me bonkers till one day I sat myself down and said "ok here's something to look at since it's creating such internal commotion". And as I started observing myself I realised that somewhere inside I knew I was both - the stickler for time and the "lackadaisical - the time I reach is the time the party starts" person. But I was terrified of anyone knowing this lackadaisical side of me. I almost went into a panic owning it to myself - imagine revealing it to the world! But a few deep breaths later I did come to terms with my split personality and while there are more times when I am dot on time and still some times when I'm "socially unacceptably" late - my internal environment now deals with it better. I can prioritise when I need to or be flexible with plans and I no longer make rash driving decisions based on this need to uphold the image of the good - always - on - time - or - suitably - flustered - apologetic - girl.

I digress but the point I was trying to make was about this severe self rejection epidemic that I observe in the world as I interact with it and see within myself. And how this insecurity we have on account of being, looking, feeling, thinking and behaving a certain way is manifested as fear that keeps us choosing what we don't want every single day in one way or another. And we justify a lot of it by saying well if everyone else does it then it must be the way to go. Everyone cannot be wrong! 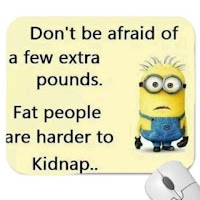 For the longest time I felt that way about health and my fat body. Despite evidence to the contrary I was convinced that I was a ticking time bomb who was lucky not to already be in a wheelchair - believe me in my darkest moments that's what my mind has said to me. One of my mind's favorites to torture me was "you are so fat you could have a tumor growing inside of you and you wouldn't even know it." Lately having researched a whole lot more and having awakened to a new fatittude - I am taking baby steps into the world of size acceptance and health at every size. Those of you who know me know that I am talking to everybody and some about this new pet project. Here I am as large as "clinically obese" speaking to lovely slender women telling them all about it and then I  hear from them how they dislike the size of their arms or have 4kgs (holy smokes) extra weight which keeps them miserable. So I say hey jump onto my bandwagon and they say nay - we have not the confidence you have to make this choice! Jaw drops.... It's not that I do not respect that choice - absolutely - we each choose what we want to do, like or dislike about our bodies - it isn't about that. It's about how we are willing to continue being miserable in the status quo because it's too scary to step out and do something different.

The reason I muse about this today is because in so many aspects of life I am still stuck in the rut of fear. Fear of the future, fear of failing, fear of not being good enough, fear of I told you so, so on and so forth even though I may be brave here and there. I believe this is the way most of us live our lives. Here and there breaking the mold but in many other ways refusing to look out of it and being unhappy for it.

I would like to choose differently though - somehow it rankles me a lot more to fight with fear. I am beginning to experiment with fear - treat it as a good advisor but not a dictator of my life and it's choices. I hear it out, there is great wisdom there and it urges me to be practical, grown up about my decisions, to understand the consequences and act accordingly but that's about it. I don't listen to it when it tells me I cannot trust myself or that I am not good enough or that I will be in deep trouble in some scenario in the future or that nobody will love me because of some of the choices I am making today. And I feel much better - nothing has changed externally - there are still challenges and decisions and changes and risks and the machinery of the world but I am no longer alone. I have my lifeguard - Fearful Scary Frightful Me - holding my hand advising me to be cautious yet willing to take that step into the unknown together. Testing grounds and taking another step and another and on. Off course there are times when it feels a little shaky and we jump back three steps in a hurry. Sometimes we fight bitterly over that leap, sulk a little then make up the next day ready to venture out. And sometimes we just dust ourselves off after that rush back, laugh hysterically at terrible jokes, have a yummy dessert and a nap and decide to step back out there - a little quicker, a little surer.
Email ThisBlogThis!Share to TwitterShare to FacebookShare to Pinterest

The face behind the name 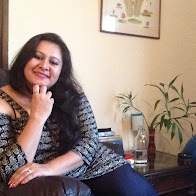